Difference between revisions of ".22 ILARCO" 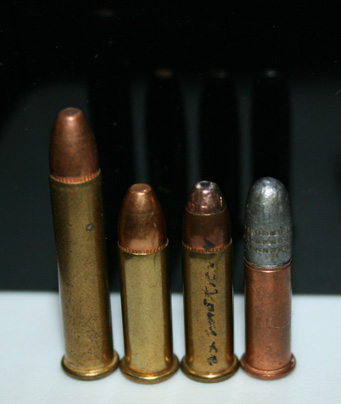 A cartridge comparison between the .22 ILARCO (two middle cartridges), the .22 Magnum parent cartridge (left), and a .22 Long Rifle round w/ lead round nose bullet (right). Photo by AaronN322 on the Gun & Game forum.

The .22 ILARCO, also referred to as the .22 Winchester Short Magnum Rimfire or .22 American was an experimental rimfire cartridge developed by Winchester in 1987 for the American-180 submachine gun. At the time of development, the American-180 design was taken over by Illinois Arms Company, resulting in the name ".22 ILARCO", but as was noted above, it is known by a number of other names as well. The cartridge never actually caught on, and production totally ceased upon Illinois Arms Company being bought by Feather Industries of Boulder, Colorado.

Following Illinois Arms Company's purchase for the rights to the American-180, they believed that a more powerful cartridge than the .22 Long Rifle would be a better fit for the gun, especially when marketing to law enforcement agencies and other organizations.

This new cartridge of course had multiple advantages: More energy than typical .22LR ammo, as well as "...the short case used the same jacketed bullet as the parent cartridge and didn’t pick up dirt and debris the way sticky, outside lubricated .22 Long Rifle cartridges can. With a 165-round magazine and full-auto fire, this was a matter of some importance." - Frank Barnes, Cartridges of the World (16th Edition).

Another selling point for converting to this more powerful cartridge is that only the existing barrel would need to be changed. Everything else could be kept original from factory, making conversion easy and cost-effective.

According to "Aaron" in a thread at the Cartridge Collectors Forum from 2010:

In the same thread, Aaron also referenced an email response sent to him by a company handling American-180 parts and accessories:

"The short magnum was a standard Winchester Magnum with the brass length shortened, so that when put back together, it ended up being the same overall length as a standard long rifle cartridge but of course a little fatter. Their was only one run of 1M and only several hundred remain. They were produced in bulk and to my knowledge no boxes were ever made..." - Val Cooper

Frank Barnes notes in his book Cartridges of the World (specifically the 16th edition), that the round utilizes a 40 grain FMJ bullet, an unspecified amount of "FL" powder, and achieves a muzzle velocity of 1.350 feet per second for 160 ft lbs of energy. This is apparently Winchester's factory load. Although the information provided by "Aaron" in the section above claims that this cartridge achieves similar performance as the .22 Magnum, this doesn't appear to be the case. In fact, Winchester's factory loading is actually weaker than modern high-powered .22 Long Rifle loadings such as the CCI Velocitor...

The cartridge seems to be referred to by many different names by various sources, so hopefully we've covered most or all of them below: