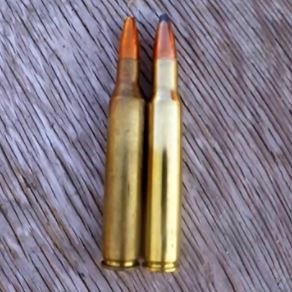 The .25-06 Remington is a centerfire medium-high powered rifle cartridge originating around 1917 or so, and it is one of many wildcat cartridges that ended up not only being officially standardized, but has also seen significant commercial success. It took just over half a century to finally be standardized by Remington in 1969. The .25-06 is based on the .30-06 Springfield cartridge, necked-down to accept .257 caliber projectiles with no other changes. Bullet weights range from 75 to 120 grains (or 4.9 to 7.8 grams).