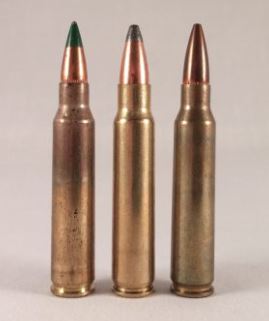 The .25-45 Sharps (6.35×45mm) is a firearms cartridge designed in 2008 by Michael H Blank, then CEO of the Sharps Rifle Company, LLC, as a general hunting cartridge for most North American game, in particular Deer, Antelope, Hogs, and Coyotes. It went into production in 2012. Unlike .300 AAC Blackout, which was targeted specifically at the suppressed rifle market (and has merely been adapted to hunting), the .25-45 Sharps was designed primarily with hunting in mind.

The cartridge name comes from its caliber (.25 inch or 6.35 mm bore, and .257 inch or 6.5 mm bullet) and case length of 45 millimeters (necked-up 5.56×45 mm), as opposed to older hyphenated cartridges that were named for caliber and powder charge. Factory ballistics with the 87 gr (5.6 g) bullet equal those of the original .250-3000 Savage with the same bullet weight. However, it appears they sacrifice its absolute maximum potential due to requiring shorter bullets for diameter, meaning a lower ballistic coefficient.

It should also be noted that another major advantage of the cartridge is that it's compatible with any typical STANAG magazine in platforms like the AR-15, meaning no additional investment in non-standard magazines, or loss of capacity. Likewise, the only modification that really needs to be made to an AR-style rifle to convert to .25-45, is simply to change barrels.

As stated previously, the .25-45 Sharps was designed with hunting in mind, but that doesn't mean it must be limited to such applications. Although the round wasn't directly intended for tactical purposes, it is certainly capable. Performance well exceeds that of the 5.56x45mm NATO, along with of course containing a larger diameter bullet, meaning an increased potential "stopping power", so to speak.

However, there are many competitive cartridges for such uses. For close-quarters and suppressed use, .300 Blackout will probably always be the better choice. For better maximum effective range and ballistic performance for an all-around intermediate cartridge, the new 6mm ARC appears extremely tough to beat. As a result, it's unclear if the .25-45 Sharps would ever be a first choice for these roles.