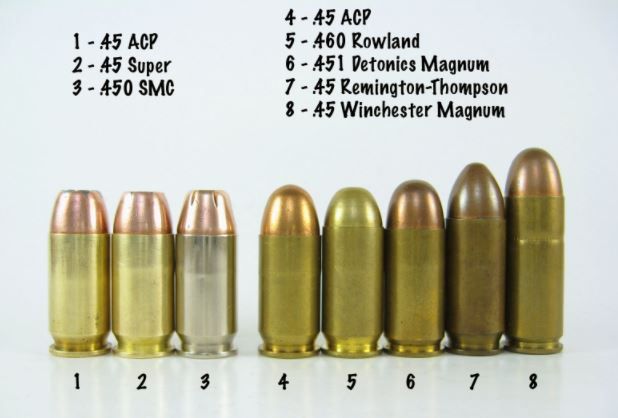 The .451 Detonics Magnum, or simply the .451 Detonics, is a pistol cartridge developed by Detonics that is similar to (but slightly longer than) the .45 ACP. It uses a reinforced case to handle higher pressure loads. Its parent case is the .45 Winchester Magnum (which is 30.4mm long), trimmed down to 0.942 inches (23.9 mm). It was deliberately made to be longer than the .45 ACP cartridge (which is 23mm long) in order to avoid accidental chambering and/or safety issues.

Performance by the .451 Detonics Magnum vastly outperforms the classic .45 ACP load of a 230 gr FMJ bullet at 850 feet per second. It even well-exceeded .45 ACP +P loadings. However, compared to its parent cartridge (the .45 Winchester Magnum) or even the .460 Rowland, the .451 Detonics appears tame by comparison.

Hollywood Hooey: The Phantom (SyFy) - An excellent article from "The Truth About Guns" about the .451 Detonics cartridge, why it was created, and it's appearance in the 2009 mini-series "The Phantom" on SyFy channel.