Right side view of the Ingram Model 6, a .45 ACP submachine gun designed by Gordon Ingram and manufactured by Police Ordnance Company from 1949 to 1952. It bears heavy resemblance to the Thompson.

The Ingram Model 6 (or Ingram M6 for short) is a .45 ACP submachine gun that was designed by Gordon B. Ingram and was manufactured from 1949 through 1952 by the Police Ordnance Company of Los Angeles, California. According to Ian McCollum of Forgotten Weapons (video below), approximately 2,000 of the guns were made.

The Ingram Model 6 has an appearance that somewhat resembles a Thompson submachine gun. In fact, it was intended to be sold as a low cost alternative for domestic law enforcement agencies in the United States. The typical version was produced with a wood stock, pistol grip and front grip, with an overall length is approximately 30" with the barrel being 9" in length. It featured a stick-type magazine with a capacity of 30 rounds. 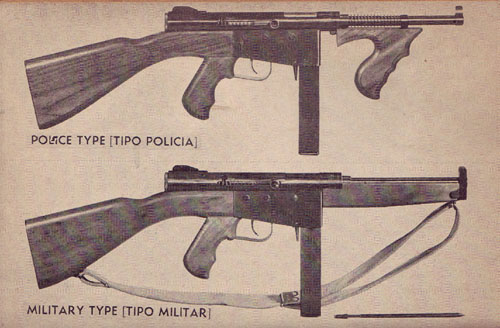 Photo from the Ingram Model 6 manual showing both the police and military models of the submachine gun. The gun's spike bayonet can also be seen in the lower right-hand corner. Image from MachineGunBoards user "dalbert".

Very reminiscent of a Thompson, especially with its ribbed / finned barrel and diagonal foregrip.

A Model 7 version was made in 1952, the main difference being that it was able to fire from a closed bolt and had a fire mode selector. Apparently, only a few of these were made in the 1950s.

A video of the Ingram M6 (police variant) being fired in full-auto: