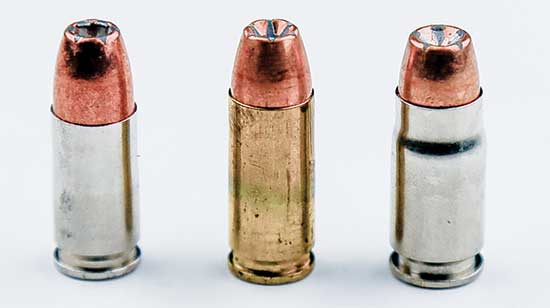 The .356 TSW (stands for .356 Team Smith & Wesson) is a centerfire handgun cartridge that was designed by Smith & Wesson in 1994, and released commercially in 1995. The .356 TSW is very similar in size to a 9mm Luger, or a 9x21mm. It was designed to be used in IPSC shooting events, but rule changes addressing the use of the new cartridge made it obsolete almost immediately. Smith & Wesson would briefly attempt to re-market the cartridge as the .356 Tactical Smith & Wesson, but this flopped as well, and factory loads appeared to have no real advantage over traditional 9mm ammo. As a result, it mostly became an obscurity.

Ammunition is made (as of early 2021) by Underwood and CorBon, who were both convinced by Scott Sullivan in 2017 to begin production again on the cartridge. According to Massad Ayoob's article on the .356 TSW at GUNS Magazine, both manufacturers are using casings manufactured by Starline Brass. Conversion kits with Briley barrels for both Glock 19 Gen 1 thru 5 and Glock 17 Gen 1 thru 4 models are available.

The technical data and drawing of the cartridge is available on the SAAMI website.

The .356 Team Smith & Wesson cartridge appears to have been largely developed for Major power IPSC competition. Essentially it allowed for the higher capacity of a 9mm handgun, while qualifying among more powerful higher-caliber handguns, offering a competitive advantage, mostly in magazine capacity. From Frank Barnes' Cartridges of the World, 14th Edition:

"The centerfire pistol cartridge was designed by Smith & Wesson in 1994 as an IPSC round. The .356 TSW fit in a 9mm magazine, and S&W convinced Federal to load it and submit it for SAAMI-spec approval, where it saw promise as a Limited-class competition round. However, because of a rules change, USPSA didn’t approve it for that class, and there were other rounds that were better choices for Open guns. S&W scrapped the project, effectively killing the .356 TSW. Federal case heads and the box were marked “356 TSW.” The load was a 147-grain FMJ Match product number GM356SW."

"The 356 TSW is a much stronger and slightly longer 9mm case (9x21.59mm), and it uses ordinary 9mm bullets for reloading purposes. To meet IPSC’s major power factor back then, the TSW had to send a 124-grain 9mm bullet at about 1,450 fps. A .356 TSW performs on par with hot 9x21 IPSC loads or full-house .357 SIG loads, but it has an advantage over the .357 SIG. The SIG cartridge is a bottleneck round, a .40 S&W casing necked down to 9mm. The .356 TSW is a straight walled 9mm casing, thus, more .356 rounds can fit into a magazine. The stronger case allows for it to be loaded to a much higher pressure (50000 psi) than similiar cartridges. The .356 TSW was mainly chambered in Smith & Wesson Model 3566 Performance Center .356 TSW pistols. Production numbers vary slightly between sources with 300-500 each of the 3566 Compact and 3566 Limited being produced, about 100 Briley Comp based on the 3566 Limited produced, about 180 J-frames (Pocket Rocket) produced, and 119 Stocking Dealer (SD356) models produced out of the 500 unit run of Stocking Dealers. Outside of the Performance Center the only other model chambered for the cartridge was a limited run of 5906's known as the Super 9. It came with three barrels, one each of 9x19, 9x21, and 356 TSW, with at least 100 produced, and perhaps as many as 200."

Below is ballistic performance information for various .356 TSW loadings. The first two (Federal and Winchester) loadings are sourced from Cartridges of the World, 14th Edition.

Despite mostly being an obscurity, it appears that a number of ammunition manufacturers still produce .356 TSW ammo. Including:

The .356 TSW: Promising Cartridge Back from the Dead - An article by Massad Ayoob at GUNS Magazine. Discusses in-depth the revival of this formerly dead cartridge.

An excellent video by Ian McCollum of Forgotten Weapons, on the Smith & Wesson Model 3566 and the .356 TSW cartridge it fired.