The 7x64mm (top) and 7x65mmR (bottom), both designed by small arms inventor Wilhelm Brenneke. They are quite similar, but the 7x65R differ and the cartridge features a rim in order to be easily used in single shot and combination guns.

The 7x65R, also referred to as the 7x65mm, 7x65 Brenneke or other designations, is a rimmed centerfire cartridge developed by German small arms inventor Wilhelm Brenneke in 1917(?). It is similar (but not identical) to the 7x64mm Brenneke, and features a rim in order to be used effectively in single shot or combination firearms. The cartridge holds a 7mm (.284 caliber) bullet and utilizes a large rifle primer such as Federal #210 primers.

It was designed and is suitable for medium to large game from boar, to perhaps even bear and moose hunting, as advertised by a number of manufacturers who still offer this cartridge.

Below is a diagram showing cartridge dimensions for the 7x64mm Brenneke (top) and the 7x65R (bottom). Although they are extremely similar (other than the rim of the 7x65R), they are not quite identical in their other dimensions. 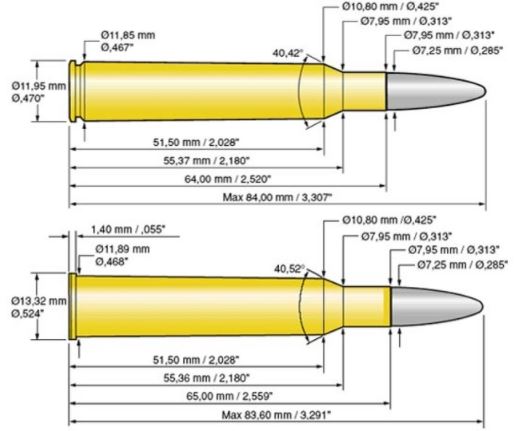 A diagram showing the dimensions of the 7x64 Brenneke (top) and the 7x65R (bottom).