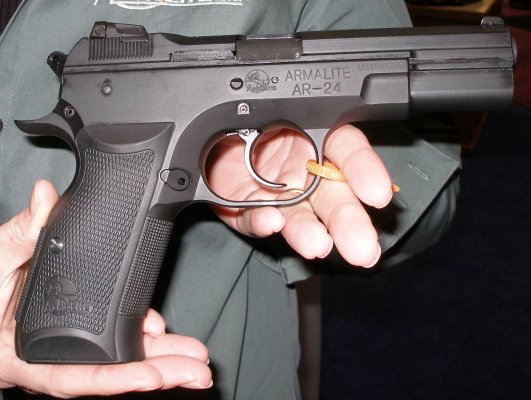 The ArmaLite AR-24, a CZ 75 clone manufactured by Sarsılmaz Silah Sanayi A.Ş. of Turkey, and imported by ArmaLite during the mid-2000's.

The ArmaLite AR-24 series were semi-automatic 9mm handguns, imported into the U.S. by Mark Westrom's incarnation of the ArmaLite brand during the mid-2000's. It was a re-branded Sarsılmaz Kılınç 2000, a Turkish made CZ 75 clone based on Tanfoglio's design improvements over the original CZ 75. In fact, Sarsılmaz still makes such handguns, and is the parent company of Sar USA, their exclusive American importer of Sarsılmaz firearms (as of 2018).

The AR-24 series was available in two major variants, the full sized "AR-24", and the compact model, the AR-24K. There were some different options for both sights as well as grip textures etc. For example, both handguns could come either with more plain-looking serrations on the grip, and typical fixed handgun sights with three white dots. Alternatively, both were available with more aggressive grip checkering, as well as an upgraded rear sight, adjustable for windage. The individual models' naming scheme appears to have went like this:

AR-24/15C Tactical Custom Model - has checkering machined on the front and back grip straps and its rear notch sight is adjustable for windage.

Note: Other sources show the individual model naming scheme to be slightly different. For example, Dan Zimmerman's review of the ArmaLite AR-24 (from The Truth About Guns) shows the naming of his full-sized AR-24 with the upgraded features to be the "ArmaLite AR-24-15-C", different from the aforementioned naming scheme, but apparently identical in meaning given the features on Dan's handgun. 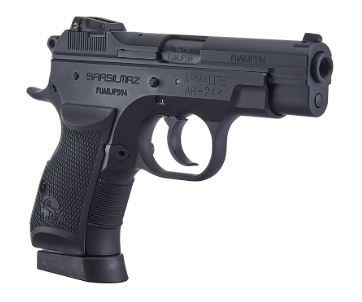 ArmaLite AR-24K, a compact 9mm CZ 75 clone made by Sarsilmaz of Turkey, and imported by ArmaLite during the mid-2000's.

An awesome video review of the ArmaLite AR-24 on YouTube, including a historic explanation of its origins:

Dan Zimmerman's review of the ArmaLite AR-24 at The Truth About Guns' website.