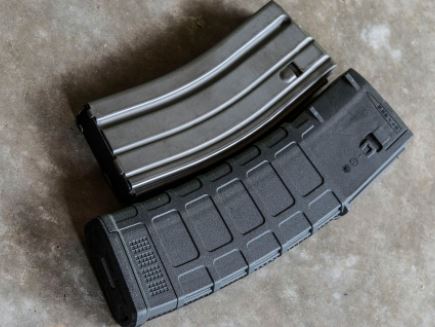 A photo of a USGI-style STANAG magazine, next to a Magpul PMAG for comparison. (Photo from GunMag Warehouse).

A STANAG magazine or NATO magazine is a type of detachable firearm magazine proposed by NATO in October of 1980. Not long after NATO's acceptance of the 5.56×45 NATO cartridge, Draft Standardization Agreement (STANAG) 4179 was proposed in order to allow NATO members to easily share rifle ammo and magazines down to individual soldiers. The United States' M16 rifle's magazine proportions were the ones proposed for standardization. Many (but not all) NATO countries subsequently developed or purchased rifles that would accept this type of magazine. The standard was never officially ratified, and remains a "Draft STANAG".

Likewise, another Standardization Agreement (STANAG 4181) was proposed, which would have standardized the stripper clips for loading the aforementioned STANAG 4179 spec magazines, however this agreement also remained a draft and was never officially ratified by NATO.

Magazine Specs and Scope of STANAG 4179

The STANAG magazine concept is only an interface, dimensional and controls requirement (e.g. magazine latch, bolt stop, and so on). Therefore, it not only allows one type of magazine to interface with various weapon systems, but also allows STANAG magazines to be made in various configurations and capacities, so long as it meets those basic specifications. The standard capacities of STANAG-compatible magazines are 20 or 30 rounds of 5.56×45mm NATO ammunition. There are also 5 round, 10 round, 40 and 50 round box magazines, as well as 60 and 100-round "casket" magazines. There are also 90-round "snail-drum" magazines, and even 100-round drum magazines. There has also been a 150-round drum magazine produced (e.g. Armatac Industries' "SAW-MAG").

The STANAG magazine is fairly compact in comparison to other 5.56 magazines, but this means it has also been criticized for lack of durability, and a need to be treated more carefully than should be required in combat situations. STANAG 4179 is only a dimensional standard, so production quality between various manufacturers is not necessarily. Magazines have been manufactured with lightweight aluminum or plastic bodies and other inexpensive materials in order to keep costs down, or to meet requirements that treat the magazine more as a disposable item, as opposed to one that is meant to stand up to repeated combat use.

This led the U.S. military to begin accepting improved STANAG magazines as of March of 2009. In order to increase reliability, these magazines incorporate heavier, more corrosion resistant springs and new tan-colored anti-tilt followers. As a result, many commercial magazine manufacturers now also offer improved STANAG-compatible magazines. These magazines are made from high-grade stainless steel bodies, rust- and set-resistant chrome-silicon springs, and anti-tilt followers. There are also highly reliable polymer magazines (e.g. Magpul's "PMAG" etc). Some offer features such as view windows, others are translucent, and so on.

ARDEC began development of a new magazine design in July 2013 to address feeding issues of older designs with the new M855A1 Enhanced Performance Round. It was first made public in 2014 and completed development in mid-2016 as the Enhanced Performance Magazine. The magazine uses a blue follower and a tan body which presents the rounds with a better angle to the weapon's feedway, preventing the hardened steel tip of the EPR from contacting the aluminum feed ramp of the M4 carbine, increasing average rounds between stoppage by 300%. 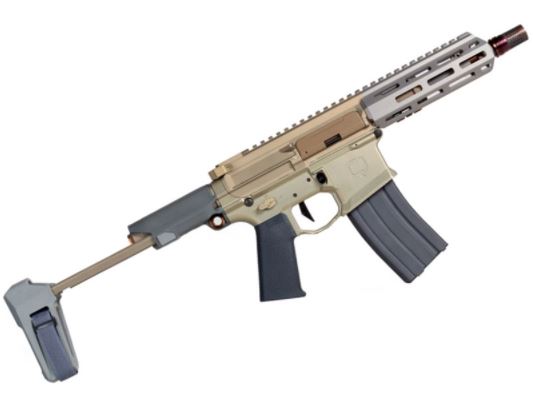 A STANAG magazine, shown inserted into an ArmaLite AR-180B. It appears to be a 20 or 25 round magazine.

Loading a STANAG magazine, especially those of large capacity and high spring pressure pushing the rounds to the top of the device, can be be a difficult task. Many devices have been made available in order to to make this simpler. They are most commonly known as magazine loaders, stripper clips, "spoons", or "stripper clip guides". There are a wide range of commercial and military type loading tools available for STANAG magazines. One such universal tool was proposed in "Draft STANAG 4181" - a type of stripper clip and guide tool for standardization based on the USGI M16 rifle stripper clips and guide tools. However, just as with Draft STANAG 4179, NATO did not ratify this equipment formally, though just as with their corresponding magazines, this type of equipment has been used by many nations more informally, even if not officially on paper.

Other Notes And Information 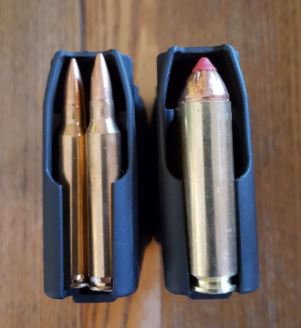 A side by side photograph of two STANAG magazines, one loaded normally with 5.56mm ammunition on the left, and the much larger .450 Bushmaster cartridge on the right.