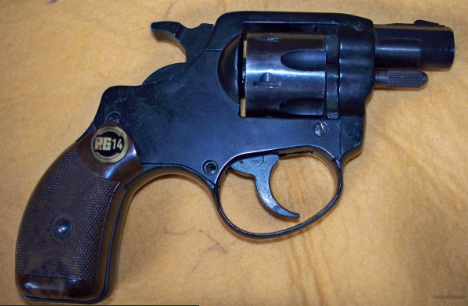 An RG Model 14 , a .22 LR double-action revolver. It was the handgun used by John Hinckley Jr. in his attempt to assassinate U.S. President Ronald Reagan. Photo Source: User "GunDeals" on GunsAmerica.com.

The RG Model 14, (also known as the "RG-14" or "Rohm RG14") is a .22 Long Rifle double-action revolver that was manufactured by German gun manufacturer Röhm Gesellschaft and its U.S. division RG Industries. It seems to have come in either a 2-inch "snub nose" version, or with a slightly longer 3-inch barrel.

The operation of this revolver is somewhat atypical. Instead of a thumb release to swing the cylinder open, this gun requires the user to remove the "ejector rod" from the front of the cylinder, with will then allow the cylinder to swing open for loading and unloading. The removed rod can also be used as an easy tool for pushing out any stuck cases one might experience.

This revolver is probably most famous for being the gun used by John Hinckley Jr. in the attempted assassination of Ronald Reagan.

Although the RG-14 is not a particularly high-quality gun, it is generally considered one of the better and more reliable firearms produced by RG. That is, at least in comparison to many of the other guns produced by the company.

RG firearms are notorious for having turned up in more than a few crimes back in the day. However, the RG Model 14 is probably most famous for being the revolver used by John Hinckley Jr. in his attempted assassination of United States President Ronald Reagan on March 30th, 1981.