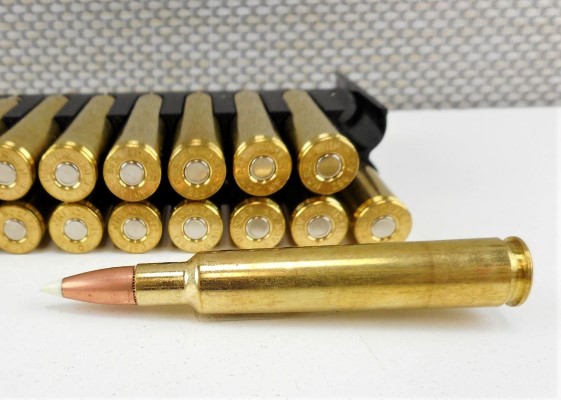 A photo of the .219 Zipper, a Winchester-created cartridge made by necking down the .30-30 Winchester to accept a .2245 caliber bullet. The Winchester Model 64 was their only rifle to be chambered in this round. Photo sourced from iCollector.com.

The .219 Zipper cartridge was created by Winchester Repeating Arms in 1937 to be used in their Model 64 rifle. It is a 30-30 Winchester cartridge necked down to accept a .22 caliber bullet (actually .2245 caliber). Marlin Firearms also offered their Marlin Model 336 rifle chambered for the cartridge.

While the .219 Zipper was supposed to compete against other varmint cartridges of the time, most lever-action rifles use tube magazines, which prohibit the use of a pointed spitzer-style bullet. This meant problems with accuracy. Winchester stopped producing .219 Zipper ammunition in 1962, Remington Arms stopped production of the cartridge soon afterwards.

Although flat or round-nosed projectiles cause rapid loss of velocity, the .219 Zipper is a fast-moving cartridge and is suitable for small game or varmints, including coyotes, and even deer and wolves if loaded with a heavier 55 grain bullet, according to Frank Barnes in his book Cartridges of the World. He also notes that it works well in guns designed to fire rimmed ammunition, such as rebarreled Steyr-Mannlicher M1895s or Lee–Enfields, but not in Mauser-type actions, which are not designed for this purpose. However, Winchester's Model 70, also a Mauser-type action, had been successfully adapted to semi- and fully-rimmed cartridges, such as the .220 Swift and the .219 Zipper.

NOTE: The ballistics data above are for maximum loads, as determined by the writers for Accurate Arms. This was based upon the Winchester Model 64 rifle being chambered in .25-35 WCF and .30-30 Winchester rather than SAAMI specifications.

We have a number of ways you can help to support FirearmWiki, including various affiliates. If you're already in the market for products below, it would help tremendously if you'd consider using our links to buy! They'll give us a commission at zero extra cost to you! Thanks so much for your support!