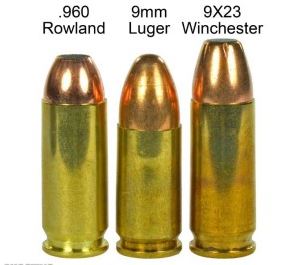 A comparison of the .960 Rowland cartridge (left) to the 9mm Luger (center) and 9x23 Winchester (right).

The .960 Rowland is a high-powered Wildcat Cartridge developed by Johnny Rowland in order to reach .357 Magnum ballistics in a handgun chambered for 9mm Luger. The case is very similar, other than being 23mm in length, rather than the standard 19mm length. This is prevents .960 cases from chambering in a standard 9mm handgun. It also has the effect of keeping the bullet seated deeper in the overall length of the case, as well as allowing for slightly more powder capacity.

Pressures produced by these loads vastly exceed those of a standard 9mm, and even 9mm +P loadings, the latter of which SAAMI rates at 38,500 PSI maximum. The .960 Rowland appears to be rated for up to 45,000 PSI. Unlike Johnny's .460 Rowland conversions, it appears that the .960 Rowland conversion requires sending in your barrel, as opposed to being able to buy conversion kits. However, you can also opt to buy a number of different types of pre-converted pistols on the site.

Johnny Rowland has also previously come out with a .45 ACP counterpart, the .460 Rowland, in order to reach .44 Magnum ballistics in a .45 ACP handgun. It operates on the same principles as the .960 cartridge - higher pressures, and a longer case to prevent chambering in a standard .45 handgun.

Below is some data on several official .960 Rowland loadings, all available at the 460rowland.com website in the external links section:

460Rowland.com - The official website for the .960 Rowland. Conversion kits, ammo, and more.