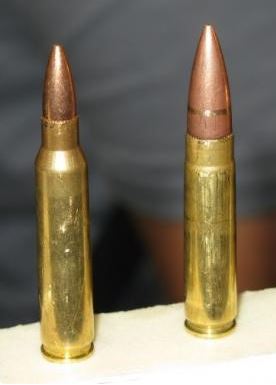 The 7.62×37mm Musang is an assault rifle / PDW cartridge introduced in 2012 developed and manufactured in the Philippines by the Government Arsenal for use by the military in special operations and close quarter battle in their Musang PDW. It doesn't appear that the weapon, or the 7.62x37mm Musang cartridge have actually been adopted, though many prototypes have apparently been built and tested since 2012 or so.

The round is directly based on the 5.56 NATO, necked up to accept .308 caliber projectiles and trimmed to meet the same overall length. It is extremely similar to the .300 Blackout and .300 Whisper, with similar overall philosophies behind development. In fact, it seems to be directly inspired by the latter.

Note: "Musang" means "wildcat" in the Tagalog language of the central Philippines.

This cartridge was developed based on previous lessons learned from the development of the Night Fighting Weapon System. It was intended for improved lethality over typical 9mm and 5.56mm rounds in subsonic loads for use in CQB and suppressed weapons, with a range of 300 meters.

The Musang is a "Wildcat cartridge" inspired by the .300 Whisper concept and made from components already produced or procured by the Government Arsenal. It uses a 5.56×45mm NATO cartridge case, necked-up to accept a Cal .30 M2 flat base bullet, a 7.62mm boat tail bullet, or a Sierra Match King bullet for an overall cartridge length equivalent to that of the 5.56x45mm NATO. The cartridge can be loaded for either subsonic or supersonic muzzle velocities.

Similarly to the .300 Blackout, the 7.62x37mm Musang cartridge can be loaded into a typical STANAG magazine (with 25 rounds able to fit properly into a standard 30-round magazine). It requires only the barrel to be changed to be used in any AR-15. The cartridge is used in the Government Arsenal's 10-inch barreled Musang PDW, based on the M4 / M16 platform.