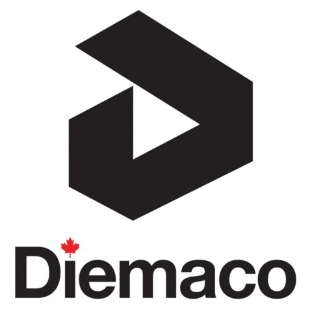 Logo of Diemaco, who originally produced AR-15 style rifles under license of Colt. Now known as Colt Canada after Colt's 2005 acquisition of the company.

Diemaco was a Canadian defense company based in Kitchener, Ontario, Canada, that manufactured the C7 family of rifles (Canada's primary service rifle based on the M16A2, first adopted in 1984) adopted under a licence from Colt. It was founded in 1974 and was later acquired by aerospace and design company Héroux-Devtek Inc in the year 2000. It was then purchased by Colt Defense on May 20, 2005 for $18.2 million. After being acquired by Colt, the company has since been known as Colt Canada.

A great article by Christopher Bartocci at American Rifleman, titled "M16s of the Great White North" gives a great summary of the history of Diemaco, as well as the trials and tribulations leading up to Canada adopting their AR-15/M16-based C7 service rifle.