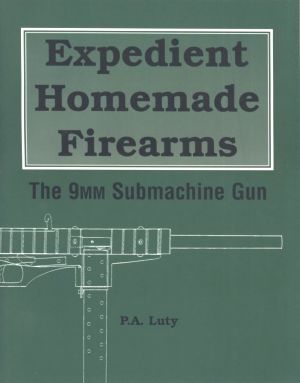 The front cover Philip A. Luty's "Expedient Homemade Firearms" (Volume I). It entails the plans for the "Luty SMG", the manufacture of which resulted in Luty's arrest and a four-year prison sentence.

Philip Luty took a tough philosophical approach to the individual right to own firearms. Another issue was the way that firearms are actually classified/legislated in the United Kingdom. For example, in the United States, "functional" pressure-bearing parts of the gun (eg barrel, bolt assemly and so on), are considered "firearms". Rather, the receiver of the gun, or in layman's terms, "the frame on which the gun is built" is what is considered the gun. This is not the case in the United Kingdom, where instead the receiver of a gun is essentially unlegislated. Rather, the pressure-bearing components like the barrel are what their laws consider "the gun".

Luty realized something. That to truly ban firearms, common items like pipes, sheet metal and so on, would all need to be banned. Unless this were to occur, the only thing needed for anyone to construct a firearm, would be to have basic knowledge on their function. As a result, he authored his two volumes of "Expedient Homemade Firearms", and constructed his own 9mm submachine gun, which is now commonly known as the "Luty SMG". Philip Luty was later arrested, both for constructing an illegal firearm, as well as for publishing his guide on how to do it, which is illegal in the U.K. due to a lack of freedom of speech. Along with Luty's protesting of firearm regulations, his Expedient Homemade Firearms books were just as much a protest against restrictions on speech in the United Kingdom.

When arrested, police had to essentially verify that what he made was in fact a firearm. Despite the crude constructions of Luty's submachine gun, he proved his own theory correct. His cheaply made machine gun, constructed from parts common at a local hardware store, did in fact function. The judge admitted that Luty had no criminal intent, but that he would be made an example of.

More information on these books, as well as other designs by Luty, can be found at: TheHomeGunsmith.com

Luty's first extensive work and design for a homemade 9mm submachine gun. The publishing of this work was partially what led to a four year prison sentence for Philip Luty. 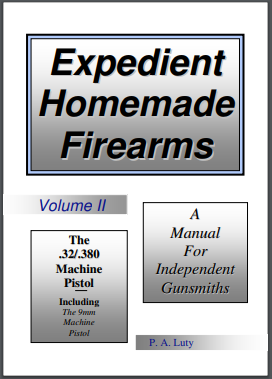 The second volume shows designs for an improved SMG/machine pistol in smaller calibers such as .32 ACP or .380 ACP. Also includes an updated version of Luty's original 9mm SMG design.

Philip Luty also came up with a number of other relatively easily made designs such as:

All of these designs are still available at TheHomeGunsmith.com (for the time being).

Resulting Arrests (Other Than Luty)

One man by the name of Clifford Rutley, had his home raided and was arrested just prior to open heart surgery. The arrest was based on a warrant issued for simply downloading a copy of Luty's "Expedient Homemade Firearms" eBook after paying for the book through his Paypal account. Rutley wrote an extensive chronicle of the event, as well as gives his philosophical perspectives on the matter, in his article at the link below:

It's unknown whether other arrests have been made as a result of Luty's eBooks, but it doesn't appear unlikely, given what Rutley (and Luty himself) went through.