From Firearm Wiki: The Internet Gun Encyclopedia
(Redirected from RG-42)
Jump to navigation Jump to search 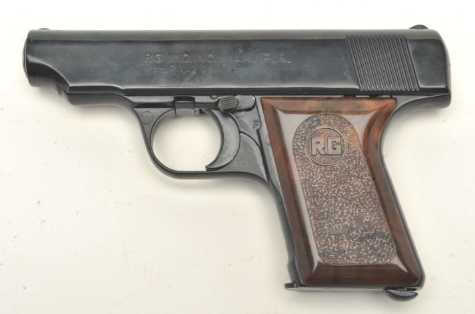 A Rohm (RG) Model 42 .25 ACP pocket pistol. It was a cheap clone of the Ortgies series of pistols. Photo Source: "Little John's Auction Service" on iCollector.com.

The RG Model 42 (also known as the RG-42 or Rohm RG42 etc) was a semi-automatic pistol manufactured and sold by German gun maker Röhm Gesellschaft and it's American division, RG Industries. They are chambered in .25 ACP and seems to function as a larger counterpart to the RG Model 26, though doesn't actually share a common design.

The RG Model 42 is basically a direct, cheaply made clone of the famous Ortgies Pistol. However, there are several differences. The RG-42's magazine release is in a different location. Also, no version of the Rohm RG42 featured a grip safety, unlike a number of the Ortgies handguns.

As is typical with many of RG's firearms, the Model 42 is considered to be of generally poor quality. Although it also relies on a spring-loaded striker mechanism to fire, it is unknown whether it shares the same potential for accidental discharge as its "baby brother", the RG Model 26.

Youtube gun channel "Sootch00" did a review on the Rohm RG42. Although he did find this pistol to be of poor quality (calling RG firearms "the bottom of the barrel"), he was able to shoot it reliably.