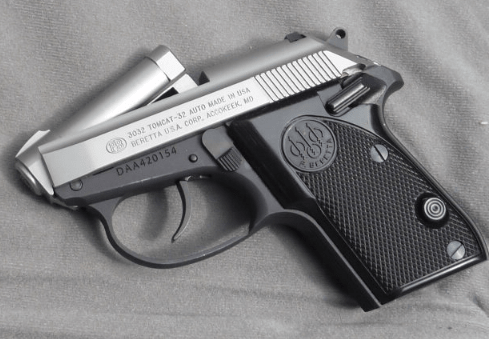 A tip-up barrel is a feature found on some semi-automatic pistols, where the first round can be easily fed by hand directly into the chamber, rather than from the gun's magazine. This method of feeding the first round has several functional advantages for the end-user. It is probably most commonly associated with several handguns made by Beretta, but other guns have included this kind of feature too.

Advantages of a Tip-Up Barrel:

The biggest advantage of a tip-up barrel is that it allows a person who lacks sufficient hand or arm strength to easily load their firearm, rather than having to manually pull back the slide by hand.

It's probably safer as well. In a firearm with an exposed hammer or similar setup (and also depending on the specific gun), one may want to carry their firearm with the hammer down, having to cock it upon drawing (essentially using the hammer as a safety). With the aforementioned methods of loading such a firearm, the user would typically have to pull the trigger and lower the hammer gently by hand. This leaves the possibility for an unsafe discharge of the firearm. A tip-up barrel (for users wishing to carry in this way), avoids this danger.

Pistols That Feature a Tip-Up Barrel:

The feature of a tip-up barrel is probably most commonly associated with Beretta, but a number of other firearms have included a tip-up barrel as well. Some of them (but probably not all) include: