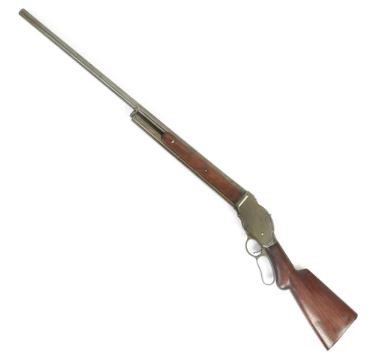 While there were already a number of successful repeating rifles on the market, shotguns were one area that had been lacking at the time. The industry standard of a double-barreled shotguns firing only two shells before reloading were found to be highly inadequate by lawmen, security personnel, caravan guards, and civilians alike. With firearms like revolvers and repeating rifles already being commonplace, the now aging double-barreled shotgun was not enough to ward off threats, especially like those seen in the dangers of the American West.

John Browning, an employee of Winchester at the time, was then tasked with designing a proper repeating shotgun to fill this purpose. He originally suggested a pump-action style firearm, and that it would be better suited for this type of weapon. However, T.G. Bennett (Winchester's Vice President) squashed Browning's suggestion, believing that since Winchester is known as a lever-action gun company, this product would also need to be lever-action to maintain Winchester's brand recognition. This design would eventually be born as the Winchester Model 1887, and later replaced with the improved Model 1901 which was properly rated to handle newer smokeless powder.

John Browning was reluctant to design Winchester's new shotgun as a lever-action because he believed it wouldn't be long before they went out of style, and would be replaced by more modern actions. In fact, he later designed the Winchester Model 1893 and the subsequently improved Winchester Model 1897, the latter of which has itself become iconic.

The Model 1887 originally came in both 10 Gauge and 12 Gauge chamberings. Interestingly enough, the later Model 1901 only came in 10 gauge. Apparently, Winchester did not want to cut into sales of their other major shotgun, the Winchester Model 1897.

This series of shotguns became one of the first (if not the first) successful repeating shotguns to hit the market.

Barrel Length / Options: 30" barrel (32" was available for special order). In 1888, Winchester began offering a 20" barrel, and an option for a Damascus steel barrel.

In the past, many companies had attempted to produce reproductions, but pretty much all of them were commercial failures. However, because of it's more established popularity, especially in pop culture, a number of manufacturers have created reproductions of the Model 1887 with some success.

The Winchester Model 1887 series of shotguns has been featured prominently in a number of major movies and video games, and this is likely what lead to it going from an interesting piece of firearms history, to among the most iconic firearms ever made.

Among the most iconic appearances of the Winchester Model 1887 in movies, is in Terminator 2: Judgement Day. It is primarily used toward the beginning of the film by The Terminator in order to defend John Connor from the T-1000. The video clip below features The Terminator (played by Arnold Schwarzenegger) firing and "flip-cocking" his Model 1887. It has been transformed into a "Mare's Leg": The stock has been removed and features only a remaining pistol grip for one-handed operation.

The Terminator can also be seen with his Model 1887 on the T2: Judgement Day movie poster. 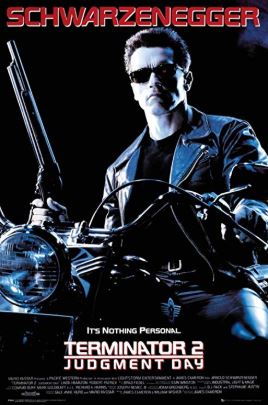 The Winchester Model 1887 was prominently featured in the 2009 blockbuster video game Call of Duty: Modern Warfare 2, developed by Infinity Ward and published by Activision. It is probably most famous for being completely overpowered in multiplayer mode.

In arcade-style fast paced first person shooter games like Modern Warfare 2, shotguns are typically only effective at shorter, room-sized distances, meaning that the player will have to adapt their play style to be effective with different kinds of weapons in the game. However at launch, the Model 1887 had incredible range and damage output, making them severely unbalanced and a favorite of many players early on. This was later fixed by Infinity Ward. 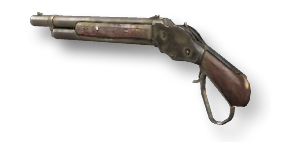 The Model 1887, as featured in Call of Duty: Modern Warfare 2