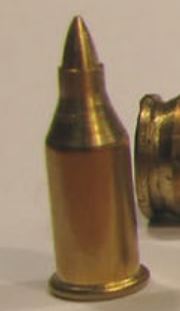 The .10 Eichelberger Long Rifle. It is based on the .22 Long Rifle, necked down to accept .103 caliber bullets. It has been said to be the smallest wildcat cartridge ever made.

As is the case with rimfire cartridges in general, each round can pretty much only be fired one time. As a result, necking down each round, seating a bullet and so on without the ability to reload, makes this a very laborious round to set up.

From Eichelberger himself, in Cartridges of the World: The .10 Eichelberger Long Rifle contains a 7.2 grain bullet with 1.8 grains of AA9 powder. This reaches a velocity of 2,160 feet per second for 74 ft lbs of energy.