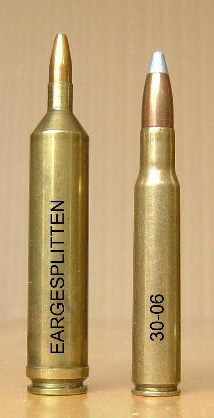 The .22 Eargesplitten Loudenboomer, designed by P.O. Ackley. Based on the .378 Weatherby Magnum, necked down to accept .224 caliber bullets. Next to a .30-06 Springfield for comparison.

The .22 Eargesplitten Loudenboomer was a Wildcat Cartridge developed by P.O. Ackley in the 1960's for Bob Hutton, a member of Guns and Ammo magazine's technical department. The intent of the cartridge was primarily breaking past the 5,000 feet per second barrier.

It appears to sometimes be described as being a necked down .50 BMG, but this is actually not true. The cartridge is actually based on the .378 Weatherby Magnum, necked down to accept .224 caliber bullets. However, according to Cartridges of the World. machinist Zachary Weighman did make a novelty inert cartridge called the ".22 Earsplitting Loudenboomer", along with a .17 version called the .17 Incinerator, both based on the .50 BMG.

It is unknown if any load for this round by P.O. Ackley or Bob Hutton actually exceed 5,000 feet per second.

One particular load is discussed in Cartridges of the World. A 50 grain bullet with 105 grains of H570 powder, achieving 4,600 feet per second for 2,349 ft lbs energy at the muzzle. Again, it's unknown if any other load by Ackley or Hutton ever was able to exceed their 5,000 feet per second goal.