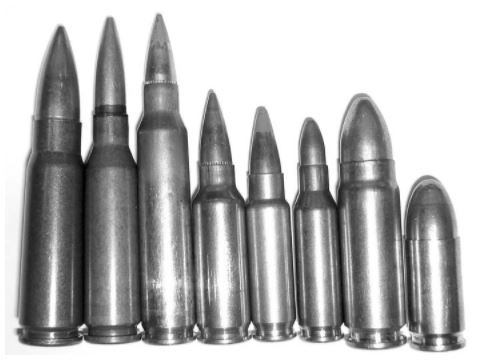 The 5.56x30mm MARS was a PDW / Assault Rifle cartridge created by Colt during the development of their experimental Colt MARS ("Mini Assault Rifle System") program. It was created by cutting down 5.56 NATO cases, and re-forming with custom dies during the program, and continued to use .224 caliber bullets. It never saw any major use, adoption or otherwise.

Ultimately, the program was scrapped along with the 5.56x30mm cartridge.

A counterpart to this round also existed - the 9x30mm MARS. It used 10mm Magnum cases, necked down to accept .355 caliber projectiles (as is used by the 9mm Luger).

According to Colt, this new cartridge was developed "to enhance accuracy, range and lethality over current cartridges such as the 9mm NATO and 5.7x28mm, and current small submachine guns in general. It used ball pistol-type powder to achieve high velocities in the platform's short 10.5 inch barrel. It was to be effective out to 300 meters or beyond.

The 5.56x30 was a wildcat cartridge that never saw any real production. It was only ever hand-loaded by Michael Harris during testing of the new platform by cutting down cases and using custom dies.

Note: It was found that there was excessive pressure with the cartridge and case was prone to bulging or rupture.

Colt experimented with other projectiles such as the M855 (62 gr. boat tail w/ steel core penetrator), as well as with tracers. They noted that the cartridge could basically be loaded with any mission-specific projectile needed, including armor piercing, hollow points, soft points and so on.

They opted to load the cartridge with magnum pistol-type ball propellant in order to achieve higher velocities in the MARS' short 10.5" barrel. Projectiles were able to penetrate kevlar helmets and vests at 300 meters.

The Firearm Blog: - An excellent article by Nathaniel F. at The Firearm Blog, which further discusses the 5.56x30, as well as the MARS project. Most notable are the trajectory comparisons shown, compared to other cartridges.