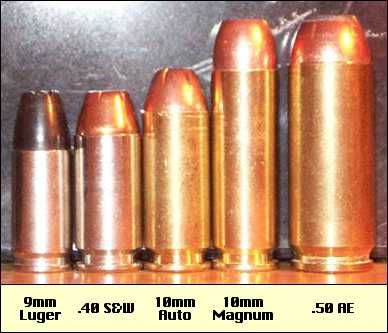 A lineup of various handgun cartridges, including the 10mm Auto (center), and the 10mm Magnum shown just to its right.

The 10mm Magnum (also referred to as 10mm Mag) looks to be a fairly obscure centerfire pistol cartridge, with origins appearing to go back to Arcadia Machine & Tool (AMT), in a version of their Auto Mag series of pistols. Apparently, it was one of the chamberings offered during the production of the AutoMag IV.

The cartridge is (mostly) a lengthened 10mm Auto, made to achieve significantly higher velocities, and to be suitable for hunting, competition shooting for silhouettes, and so on.

It should be noted that a longer case length is not the only change to the case. It also has a thicker internal portion of the rim and flash hole, as is shown in the image second down on the right of this article. 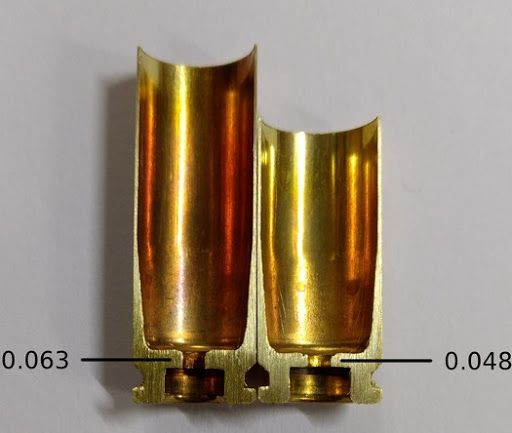 A case comparison between the 10mm Magnum (left), and it's smaller brother, the 10mm Auto (right). As you can see, the length of the case is not the only difference.

Colt seems to have briefly experimented with this round in their Colt MARS "Mini Assault Rifle System" PDW program in the late 90's, by necking down the cartridge to accept a .355 caliber projectile, creating their 9x30mm MARS cartridge. This round was the counterpart to their other experimental PDW-style cartridge, the 5.56x30mm MARS, which was essentially a shortened 5.56 NATO round that fired at reduced velocities to be suitable for their new design's smaller form factor and lighter-weight.

Ballistically, the 10mm Magnum offers a significant increase in energy over the 10mm Auto, and is comparable to (and even exceeds) many .41 Remington Magnum loads. One such example in .41 magnum is Barnes Vort-TX 180 Gr. HP's at 1520 fps, for 923 ft lbs of energy.

Below is information from Reed's Ammo, which will be referenced and linked to in the "Resources" section at the bottom of the article. As of writing this, they appear to offer two load options, one with a 180 gr. hollow point, and another with a 200 gr. hollow point. Ballistic data is in the table below.

Reloading: It doesn't appear there is any clear or simple way to create casings for the 10mm Magnum, but this needs additional verification.

Loaded Ammunition: It appears that loaded ammunition is available from a company called "Reed's Ammunition & Research, LLC" in two loads, which are referenced above in the "Ballistic Performance" section. A link to their site is in the "Resources" section at the bottom of this article.

The most well-known gun to ever have the 10mm Magnum chambering is the AMT AutoMag IV (pictured below), but it appears some other custom guns have been chambered for the cartridge as well. One example is the "Ultimate Ten" by Kase Reeder of Reeder Custom Guns. Their site will be linked below, but it's unclear if they still make this particular offering. The Ultimate Ten is also pictured below. 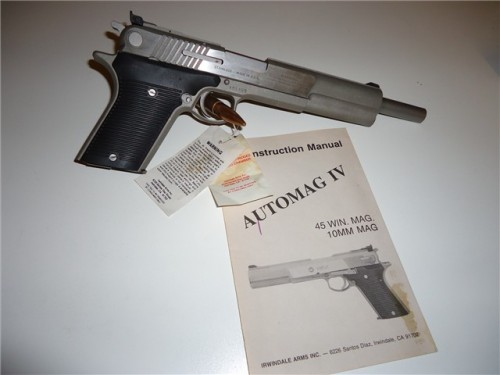 A photo of the AMT AutoMag IV, which was offered primarily in .45 Winchester Magnum, but also the more obscure 10mm Magnum. 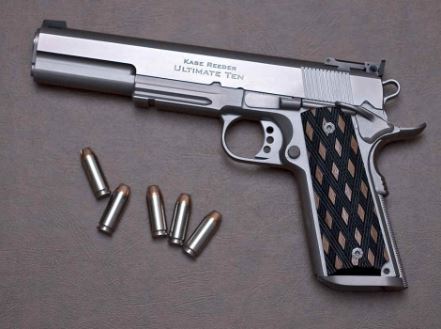 Picture of the "Ultimate Ten" by Kase Reeder of Reeder Custom Guns. Chambered in the powerful 10mm Magnum cartridge.

Reeder Custom Guns: - A custom maker of custom guns, they previously put out the "Ultimate Ten", a 1911 chambered in 10mm Magnum. It's unclear if it can still be ordered, though.