The AMT Lightning 25/22 was a clone of the famous Ruger 10/22, that was produced by Arcadia Machine & Tool (AMT). Both major models, the "target" and "tactical" variants, featured AMT's famous stainless steel and black aesthetic. The "target" standard model is essentially just stainless steel Ruger 10/22 with black synthetic stock. The "tactical" model features a folding stock and some other interesting features to properly fit its name.

One version of the AMT Lightning, the Theoben Target Model, was made with supreme accuracy in mind. They are incredibly rare and

(Note: These specs are mixed and all of them may not apply to one or the other model) 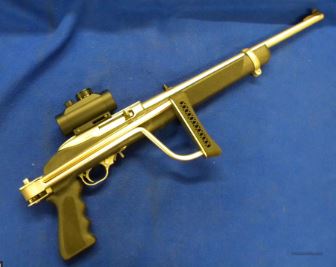 A photo of an AMT Lightning 25/22 rifle. (Tactical Model)

Featured a folding pistol-grip stock, and came standard with a 25 round magazine. Stainless barrel and receiver, and so on, fitting with the "tactical" name. In fact, it might be the case that only this model is designated the "25/22" hence the magazine capacity, but verifying this was difficult.

This model is very much a "standard" Ruger 10/22 so to speak, but with a stainless barrel and receiver, and a black synthetic stock. Seems to have come with a 10 round magazine in the package. 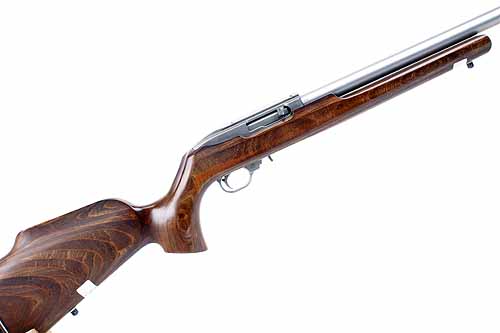 A photo of the extremely rare Theoben Target Model variant of the AMT Lightning 25/22 rifle.

Appears to have been a semi-custom rifle. Original gun would be manufactured by AMT, then modified for accuracy by Theoben, a formerly UK-based company primarily known for their match-grade airguns.

It appears this rifle may have been modified in several ways. One change was the inclusion of a "pistol-grip" style wood stock, typical of what you'd find on many match-grade rifles. Also, all of them may have came with a built-in suppressor, considering the UK market. And finally, it appears that it featured a 25.5 inch barrel. Unfortunately, very little information is available on this obscure rifle variant overall.

There appear to have been some full-auto conversions of the Lightning 25/22 by John Norrell. The primary difference seems to be (of course) the full-auto conversion, along with a significantly shortened barrel, protruding only slightly past the stock. There may or may not be other companies who performed similar modifications to these rifles at the time.

A great YouTube video by Michael Bell showcases the differences between the AMT Lightning 25/22 and a stainless Ruger 10/22 model, as well as some other great information on these guns.