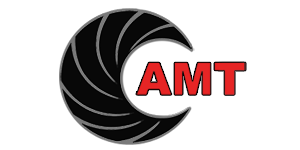 The Arcadia Machine & Tool (AMT) logo. Although they used several over their years of operation.

Arcadia Machine & Tool, often known simply as "AMT" was an American firearms manufacturer that was in operation from 1976 to 2001. After the company closed its doors, High Standard Manufacturing Company would end up acquiring the rights to a number of AMT's products. They continued to produce a number of those firearms, including several of AMT's famous "AutoMag" series of handguns until they too went out of business in 2018. As a result, the only source for these firearms is the used market.

Arcadia Machine & Tool started out primarily manufacturing pocket pistols such as their "Backup" series of pistols. While they are often lumped in with the other "Ring of Fire" manufacturers (likely because of their close proximity to them), it should be noted that the quality of AMT's firearms are considered far superior to those other manufacturers and were definitely not low quality "throwaway" firearms like those other Saturday Night Specials.

AMT Lightning (Pistol) - A Ruger Mark II pistol clone that led to a lawsuit from Ruger!

Assorted Bolt-Action Rifles: Semi-custom offerings from AMT at the time. Appear to have been made to order..?